Once Upon An Adventure

"To live… to live would be an awfully big adventure"

Halloween. All Hallow’s Eve when the witches, warlocks, and demons fly. Where we give candy out to children in the hopes that they aren’t demons sent to play a trick on us and steal our souls.

It is the one night a year that I should be afraid of the dark, where I should stay home and lock the doors and keep all evil away. Yet, as a culture we are drawn to that day. The parties, costumes, and ideas draw us out and allow us to walk a different path.

It makes abandoned buildings that are chained up more open than a Walmart.

(This statue is behind locked doors in the city center.)

It makes hanging out with friends that much better. 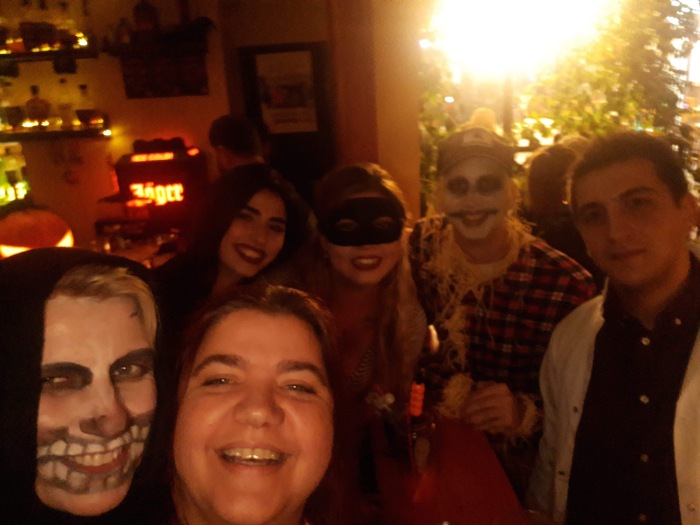 We decided that we needed to celebrate Halloween in Greece. They don’t normally celebrate it but Greeks do love to party. I joined two of my classmates (Michelle and Paige) at this store called Jumbo. Think of it as a Walmart and you won’t be far off, it is basically a wonderland for creativity. In Jumbo we bought the supplies to make Halloween a reality. Michelle made amazing gift bags for everyone, I took the easy way out and gave out mini candy bars.

Costumes took a bit of work. But in the end, it was worth it.

After we finally got to (the bar). The only place that has a Halloween theme or event in all of Kalamata. The night seemed to take off! First off I got complimented by a ton of people (instead of just stares), then I knew 99% of the music that was played, and the owner came out and gave us all free shots! Naturally I didn’t drink mine, but I really appreciated the gesture. I also got invited behind the bar with my friend Michelle and took a picture with one of the bartenders.

I stayed up way later than normal and will probably have a headache for a few days but it was definitely worth it!