Once Upon An Adventure

"To live… to live would be an awfully big adventure"

For many of you this will come as no surprise, but for others it will. I love fairy tales, folklore, ghost stories, or really any narrative that was used to teach. The history behind fairy tales is always so fascinating. Why did we start telling each other tales that are filled with myth and legend to inspire us to do better?

I like to think it is because a story is easier to remember, that a lesson while harsh can be softened and absorbed faster through the experiences of others. Like the cobbler and the elves where he starts to repay the elves who make the shoes for him and that kindness rewards kindness; or the Icelandic tale of Grýla (depicted below) that was used to help mother’s be able to manage really rambunctious children (I like to think it is basically the alter ego of every mother, like the whole “stop it or I’m going to get angry” just taken to the Viking level of “stop it or I’m going to tear your heart out of your chest and eat it. Love you!”). Grýla is the Giantess that is the mother of the Yule lads and can detect naughty children all year. Basically reverse Santa. Like in Iceland, you’re good or you die. Who needs gifts when the gift you receive is life?

My personal favorite fairy tale is Peter Pan, and I have read many different versions of the story and just love the idea of never growing older. Growing older to me is an acceptance that I can’t learn anymore, can’t love any greater, and can’t experience anymore joy. Fundamentally I think this is wrong. We CAN always grow, learn, love, laugh, experience, and grieve more. That is the best thing about being human.

But really you all came here for what I did in Kalamata on the 23rd of November 2018.

The Cultural Ministry of Kalamata partnered with the University of Peloponnese to help bring alive the traditions of the past. So over the next 3 or so years there will be a scattering of cultural events hosted by this partnership. The 23rd just so happened to be fairy tales all told in Greek. I believe they are planning to recreate a wedding sometime in the years as well which would be so much fun to be a part of (Ok, maybe because I’m not married and have been thinking that maybe I should work on possibly trying to get married Maybe.)

We started in the Center of Kalamata at the Church of the Apostles (refer to my Halloween post if you want to see what the building looks like). There was a band of 4 musicians who started playing some music while 3 students from the University of Peloponnese started yelling something. I didn’t get it translated… but they tried to draw the attention of random citizens like a town crier would have. Once they performed their role they gave attention over to the first of 3 story tellers. The tale was about the Truth and how it was ugly and naked so it was cast out of the home, someone came by the home and told Truth that it was ugly because it was naked so they dressed it up and people accepted the Truth. This tale was short before we surged on as a crowd and took over the first building.

The owners of the establishment knew what to expect but none of the patrons did, it was pretty cool. The story told in here was about a King who had a mustache that was so wide 6 birds could rest on it. One day the King woke up to find a rooster sitting on his mustache. The King was so angry that he ordered the Rooster drowned, but little did he know the Rooster was magical and it sucked up all the water into its butt. When the rooster didn’t drown the King ordered it thrown in an oven and to be cooked… Well when the Rooster was thrown in it still had all the water in its butt. Guess who didn’t get cooked. You’re right, the King.

Oh yeah, and the Rooster. While many more events like this happened, at one point the Rooster sucked up a ton of bees and released them on the King. And another time the Rooster basically stole all of the kings gold. I’m really not sure how this tale ended but it was so much fun to listen to.

After this tale we walked back down town and told another story again at the Church of the Apostles and this story was about a Princess and a Prince. The Prince was rude and told the Princess compliment/non-compliments like guys do (not just rich ones, honestly we don’t think 90% of the time when a girl we think is cute is around. The other 10% of thoughts are just the wrong thought/action so we’re dumb 100% of the time. True story). Anyways the Princess didn’t like that so she dressed up as a troubadour to play a prank on the Prince. She got an instrument from someone and played it for the Prince. The Prince loved it so much he wanted to buy it from her. She said no, but if he really really really wanted to have the music always… he could kiss her horse on the butt! Too make matters worse for the Prince he had to do this multiple times. The princess then revealed herself as the Princess and basically said if he was willing to kiss her horses butt he was good enough for her.

(Ok that isn’t fully the reasoning but come on, it is funnier that way)

After all of that had transpired they decided to get married, but the Princess wasn’t quite done playing tricks. She made a doll of herself out of flour and sugar and once they were married she rushed up to room and traded out herself for the doll in the bed. The prince came into the room AND CHOPPED THE HEAD OFF THE DOLL. The Princess watched this all from the closet and jumped out and was like “Ha! I caught you cutting the head off the doll” and the Prince was all like “OMG! I am so happy that I didn’t actually kill you. Let’s throw the pieces of the doll out the window” and the Princess agreed and they lived happily ever after.

(I am still working on the lesson here… as far as I can tell, um, don’t get married to either of those people)

After this we went and occupied many more eating establishments and it was a blast. I don’t have the ability to post videos here but I’ll attach the music that was played in the streets by the band. I asked the clarinetist what songs they played and he sent me all of them. These are all songs from the Peloponnese.

Really really fun pieces and it was pretty cool being part of the crowd. 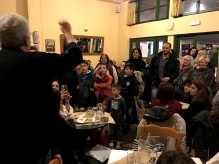 I will hopefully talk to the story tellers soon and get the actual stories that they said,, but for now, it was just a great experience.

One thought on “Fairy tales, Folklore, and stories that teach”